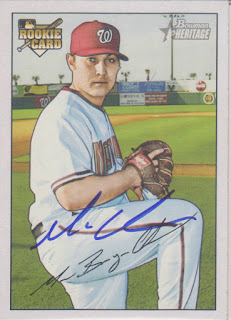 Here is the first of three cards that Matt Chico signed for me at a Wichita Wingnuts game in 2012. Matt was playing for the visiting New Jersey Jackals when they came to town for interleague play.

Matt was drafted by the Arizona Diamondbacks in the third round of the 2003 draft out of USC. He pitched for the D-Backs organization for four seasons before being dealt to the Nationals for Livan Hernandez.

He broke camp in 2007 with the Nationals and was a mainstay in their rotation for most of the season. Though he did pitch in two AAA games in August, he made 31 starts at the Major League level and went 7-9 with a 4.63 ERA and 74 walks to 94 strikeouts. He had a hard time keeping the ball in the park that season as he gave up 26 long balls, including three in a game twice. The first three he gave up were in his Major League debut against the Marlins.