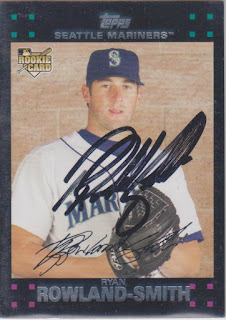 Here is a card that I got signed at a Texas Rangers game in 2008 while Ryan was playing for the Mariners. I got him to sign this lone card for me after batting practice. At the time, it was the only card I had of him. Six years later, I would get two more cards signed by him.

In some of the first posts I did on this Update and Highlights set, I talked about how I had a lot more problems with unprepped cards from the Update set than I did for the first two series. This card is the one exception to that argument. This card is totally unprepped and it came out looking good. I wish I could say the same about tomorrow's card.

Ryan is an Australian that was signed my the Mariners at the age of seventeen. You always hear about the Latin American kids being signed at a young age, but I had no idea they did that in Australia, too. Granted, Ryan was eighteen when he made his pro debut. But, it has got to be an entirely different mindset for a young Australian coming over to play baseball than it is for a Latin American kid. Luckily it worked out for Ryan as he played in the big leagues for parts of four seasons.
at 8:52 AM