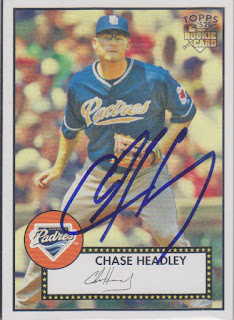 Here is a card that I got signed at a Salt Lake Bees game in 2008 while Chase was playing for the Portland Beavers. My buddy and I were on our way back from ballparking the left coast and Salt Lake City was one of the stops on the way home to break up the drive. Chase was nice enough to sign my lone card of him before the game.

Even though this is the only card he signed for me, it is not the first Chase Headley card I have posted on here. In 2011, I posted a card of Chase that was sent to me by Rod, from Padrographs. I think I gave that card away in a contest that was won by Night Owl and he eventually traded it to Backstop Cards.

When I posted the last Headley card, he was just starting his third full season as a Major Leaguer. That was about five years ago and he has done a lot since then. The biggest thing that happened to him was getting traded to the Yankees prior to the deadline in 2014. As a result of that, he got to play in his first playoff game this last season, a Wild Card loss to the Astros. He also had a monster year in 2012 when he went off with his bat. That season, he hit .286 with 31 home runs and 115 RBI. Those power numbers are so outside the norm for him that it isn't even funny. The most home runs he has had in a season, before or after that, is 13. And the most RBI was 64. I am not sure what was going on in 2012 for Chase.

One of the things that I like to do on here when I post the last card I got at a ballpark is to show some photos of that ballpark. So, here are some pics of lovely Smith's Ballpark, which was Franklin Covey Field when I was there. If you ever get a chance to take in a game there, do it! It has the most beautiful backdrop that I have ever seen at a game. Unfortunately, these pics do not do it justice. 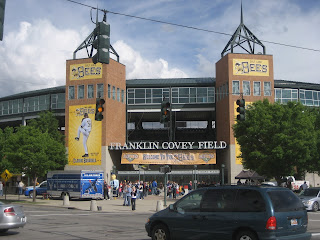 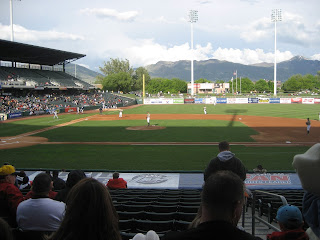 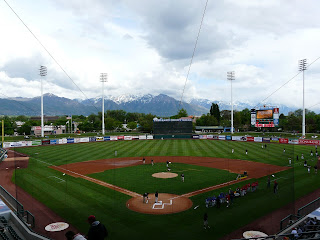 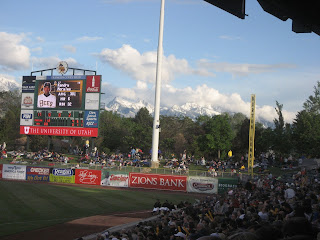 I love the ballpark pictures... looks like a nice place to watch a game.

At one point, I harbored thoughts of trying to complete the whole 2007 Topps '52 set and get it autographed. I think I got about halfway there before I lost interest in chasing after the more difficult signers.