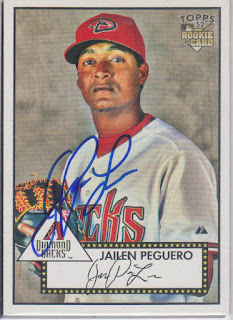 Here is a card that I got signed by the former Diamondback, Jailen Peguero, this past summer. Jailen was playing for the Winnipeg Goldeyes and I was able to get him to sign this card during pregame at a Wingnuts game early in the season.

On a positive note, Jailen only faced one batter more than three times in the Majors. That batter was Matt Holliday and he was owned by Jailen. Holliday was 0-4 with two strikeouts. He was the only batter to strikeout more than once against Jailen.

After the 2008 season, Jailen bounced around the AAA circuit for a few years before ending up in Mexico in 2011. He played there until joining Winnipeg last year. With Winnipeg, he was 5-4 with 16 saves and a 3.76 ERA.