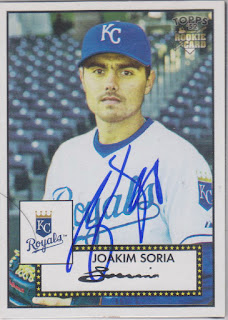 Here is the second card of Joakim Soria that I have posted on here. I posted the first one, a gold '07 Topps, two weeks ago and that one can be seen here.

The first one I posted was signed at Royals Fanfest and it has a beautiful signature on it. This one, on the other hand, was signed by the Royals parking lot in 2010 and it features Soria's rushed ballpark signature. For me, this is the more common version of his signature in my collection. It is basically an "S" followed by a line and his number. In his nice signature, you can actually make out some other letters in his last name. I still find it strange that he only signs his last name, though. Maybe he is the Mexican Ichiro.

Joakim is going to be at Royals Fanfest this weekend, so it will be interesting to see if his signature has changed at all since I got him last in 2011.

Speaking of Fanfest, I will be heading up there Saturday. I took a year off last year, but I got back on board this time around. I wanted to head up there Friday, to try to beat some of the weekend crowd, but a job interview is interfering with that. So, Saturday it is. I am sure it is going to be a madhouse that day since we are World Champs and all. But, hopefully everything will go smoothly.

So far, this list of Royals attending the event is a little lacking. While the normal guys that are there consistently are still going to be there (Gordon, Hosmer, Moose, and Perez), some of the newer guys that I still need 'graphs from are not (Morales, Infante, and Paulo Orlando). Even our one "big" free agent pick-up, Ian Kennedy, is not on the list yet. I keep waiting for the list to expand a bit, but with only two days before the event, it is not looking like much is going to happen. I will just have to wait to see how it goes.

On a related note, it appears the Royals disbanded their caravan for the first time ever. The sad part about it was that there was no announcement of it ceasing operations this season. They just did not talk about it. I've seen many people asking about it on Twitter and those questions are completely ignored. I hope this World Champs euphoria does not last too long because this is not going to be the same team after 2017. When that time comes, the team is going to need its loyal fans that stuck by them through all the bad years. And cancelling the caravan is not a way to appease the fans that cannot make it to Fanfest.

Have fun at Royals fanfest.

It's a shame about the caravan... the Mets never had a fanfest, but they did do a winter caravan right up through 2006. They went to the playoffs and then all of a sudden, the public events just never got scheduled again.