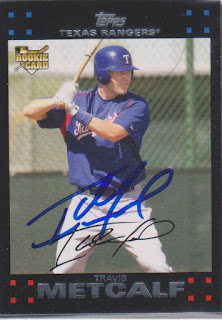 This is a card that I got signed by the former Ranger, and fellow Kansan, Travis Metcalf. I got the card signed at a Wingnuts game in 2011 while Travis was a member of the Ft. Worth Cats. I could only find one card of Travis before the game, so this was the lone card he signed for me. I, of course, found another card of him in my collection later on that I totally missed. I really need to get my cards more organized.

Travis played for the Rangers for parts of two seasons in 2007-08. He only got into 80 games and he hit .249 with 11 home runs and 35 RBI. He played in 57 games in 2007 and hit .255 with 12 doubles, 5 home runs, and 21 RBI. He played in fewer games in 2008 and most of his numbers decreased from 2007 from the 105 less at-bats that he had. But, one number did rise and that was his home run total. Though he did have ten less doubles in '08, he managed to squeak out one more home run than he had the previous season. He even had one more home run that year in the Majors than he did at AAA, even though he had over 220 more at-bats at the minor league level. He must have just been swinging for the fences when he was called up by the Rangers in '08.

After 2008, Travis played two more seasons of AAA ball before heading to the American Association in 2011. He hit .275 with 4 home runs and 20 RBI before calling it a career that season.

For those of you keeping score at home, this card is a red back.
at 8:54 AM