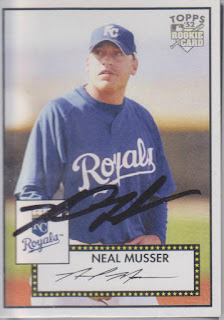 Here is the final card of Neal Musser that I have to show on here. This one is the first signature from him that I got. I got is signed after an Albuquerque Isotopes game in 2008 while Neal was playing for the Omaha Royals. The other two cards that he signed for me were his '07 Bowman and his '07 Omaha Royals team card.

That summer, my best friend and I took an epic ballpark trip to the West Coast. Over the course of the trip, we stopped and saw games for the Albuquerque Isotopes, Arizona Diamondbacks, Anaheim Angels, Rancho Cucamonga Quakes, San Diego Padres, Tijuana Potros, Los Angeles Dodgers, Lancaster JetHawks, Salt Lake Bees, and Colorado Rockies. I 'graphed all of the minor league games and it is what got me back into collecting autographed cards. The Isotopes game was the first ballgame that I ever got a card signed.

Since this is the last card I had to show that was signed at Isotopes Park, it is now time to show off some pics of the ballpark. Isotopes Park is a great place to catch a game. It is beautiful from the outside and on the inside. 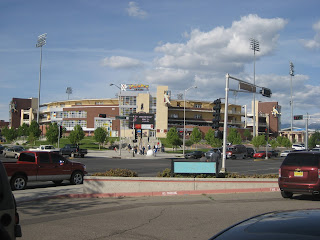 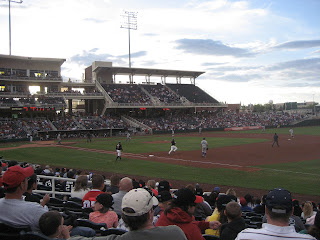 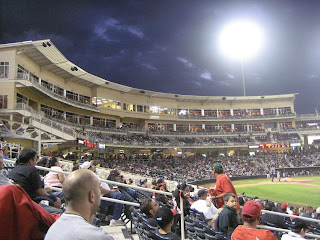 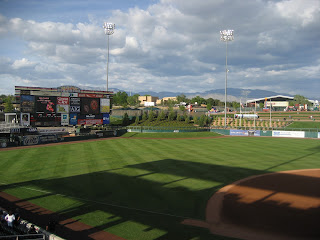 Centerfield features a hill reminiscent of Tal's Hill in Houston. At the game we attended, we saw Omaha's Mitch Maier make an over the shoulder diving catch up this hill that was one for the ages. 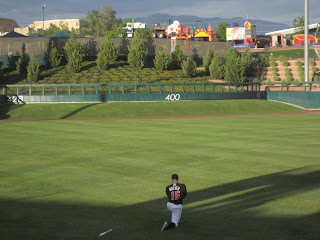 The 'Topes even had a bullpen cart. Unfortunately, it was only used for between innings promotions. 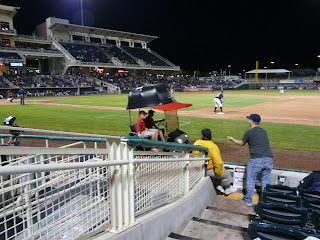 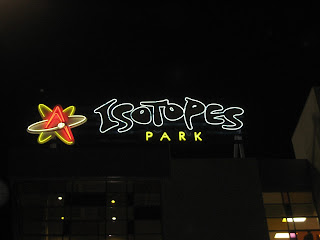 That must have been an amazing trip.