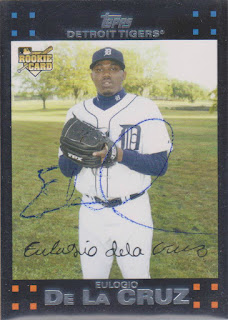 Here is a card that I got signed a couple of days before the previous one of Ryan Rowland-Smith. This was signed at a Round Rock Express game while he was playing for the Albuquerque Isotopes. He signed this lone card for me before making his way onto the field. And since this was me getting this card signed in 2008, it was unprepped and came out looking like total crap.

Eulogio, who also goes by Frankie, played in parts of four Major League seasons with the Tigers, Marlins, Padres, and Brewers. He saw the most big league action with Milwaukee in 2011 when he got into 11 games and logged 13 innings while posting a 2.77 ERA. For his career, Frankie has no record and a 8.16 ERA. He walked 26 while only striking out 20.