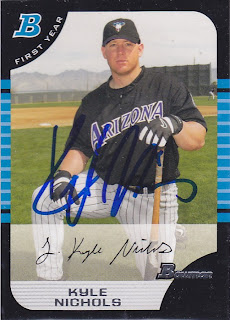 Here is a card that I got signed at a Wichita Wingnuts game last season. Kyle was playing for the El Paso Diablos at the time and I was able to get him to sign this card just prior to gametime. I had actually bought this card the previous year to get signed at a KC T-Bones game. But, Kyle was released by the Joliet Jackhammers before the team got to Kansas City. Lucky for me, he found his way to the American Association for 2010.

Kyle was an undrafted free agent that was signed by the Diamondbacks out of college in 2001. He did well in the D-Backs system and by 2004, he was hitting .293 at the AAA level. That must not have been good enough for the D-Backs, though, as Kyle spent 2005 playing AA ball for the Reds and high-A for the Phillies. That was his last season in affiliated ball.

Since then, Kyle has been making the rounds in the independent circuits. He has played in the Northern League, the Atlantic League, the Golden league, and the American Association. Maybe he might find his way to the Can-Am League or the North American League this season, just to try something new.

Kyle has the distinction of having played with El Paso Diablos in both the Texas League and the American Association. There cannot be too many guys that can make that claim.

There will not be a post tomorrow. But, starting Wednesday, I will have five straight posts of Padrographs from this set. Just to break it up a bit, I may have a quick contest on Thursday or Friday. So, stayed tuned for that.
at 6:48 PM