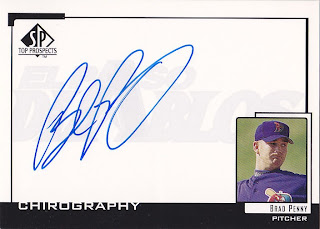 Here is another card that I bought from checoutmycards.com a few months back. The reason why I bought this card is because I missed out on getting a card signed by Brad in 2008. That summer, I went down to Oklahoma City to visit AT&T Bricktown Ballpark. The visiting Las Vegas 51s were in town and Brad was on a rehab assignment with them. The only problem was that I was unaware that Brad had joined the team and I didn't take any of his cards down there with me. When I found out he was there, I tried to trade for a card of his and I had no luck. I even found a guy with a small stack of his cards, but he wouldn't trade me one because "he didn't have any of these cards signed yet".

By then, I was hoping that Brad wouldn't even sign, but that wasn't the case. Brad is from Oklahoma and still lives there in the offseason. Because of that, he came out early to sign and he signed for everybody. It was good to see a big league player do that, especially in his home state, but I just wish that I had a card for him to sign. Instead, I got I got my ticket stub signed. But now, I do finally have a card signed by him and it only set me back $1.15.

I like the look of this card. It is a little odd, but it sure does showcase the signature. This design probably wouldn't go over today with the players, though, as many of them do not like to sign big open white spaces. I don't understand it, but they claim it has something to do with identity theft.

It looks like Bard is pitching for the El Paso Diablos in this card. The Diablos are no longer a part of the Texas League, but they have been reincarnated into the Diablos of the American Association. The back of the card features a Portland Sea Dogs logo because, by the time this card came out, Brad had been traded to the Marlins organization.

Here is a picture from Brad's rehab start in OKC. 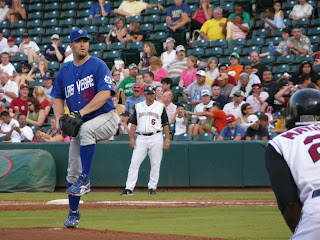 I appreciate the emphasis that design places on the autograph, but I've never really liked it.

Great picture of Brad, but I totally feel you on not having something to get signed. That's the worst feeling, especially when others aren't willing to help you out.

The card has an interesting design, but a little too much white space for me. I think if the picture was twice as big I would like it more, but for $1.15, you can't really go wrong.