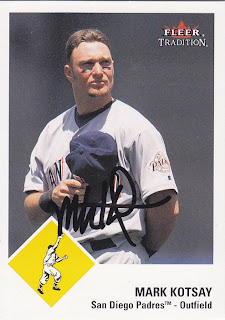 I posted a Mark Kotsay autograph a few weeks ago and it was a card that I had bought off of checkoutmycards.com a few months back. Two weeks after that card arrived at my house, this card arrived in a package from Padrograph Rod. My first thought when I saw this card was "dammit, I wasted two bucks on a Kotsay autograph two weeks ago". Then reason set in and I was happy that I had a signed card of Mark as a Marlin and a Padre. So, it's all good.

Throughout his career, Mark has played for the Marlins, Padres, A's, Braves, Red Sox, and White Sox and, right now, he is in Spring Training as a member of the Brewers. While he has never lived up to the hype that he generated in college, he has certainly been a very serviceable Major Leaguer. His best season came as an Athletic in 2004. That was the only season that Mark has ever hit over .300 and he also had career highs in hits, doubles, and extra base hits.

Mark broke into the big leagues as an outfielder, but he has been spending a majority of his time at first base over the last couple of seasons. With the first base job locked down in Milwaukee, it will be interesting to see what Mark's role is going to be with his new team.
at 5:50 PM

Whenever I read about Mark Kotsay, I immediately (and irrationally) hear his name spoken by Rich Eisen.

That is funny that Rich Eisen's voice is in your head.