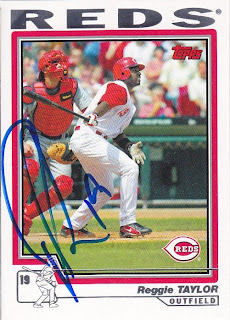 Here is the final card before I start into my 2005 cards. When I finished up with the 2004 cards, I thought I would be on to the '05s in three weeks or less. That was on January 9th, so I obviously did not meet my deadline. A couple of autograph packages, Royals Fanfest, and a job promotion turned my three week timetable into about eleven weeks. But, I made it through and I will start on the '05s tomorrow or Saturday.

Speaking of autograph packages, that is where I got this card. It was included in the last package that was sent to me by Paul's Random Stuff.

Reggie played in the big leagues with the Phillies, Reds, and Devil Rays. He only got into a handful of games with Philly and Tampa Bay, but he saw some decent playing time with the Reds in 2002 and 2003. In '02, he played in 135 games and he hit .254 with 9 home runs and 38 RBI. That was his best season at the Major League level.

Congratulations on the job promotion.

Believe it or not, I didn't remember that Taylor was still playing last season.

Congrats Zach! Hoping the promotion brings you a lot more money and not too much more work!