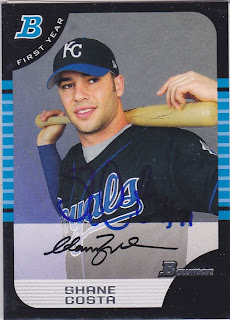 Here is a card that I did get signed in Albuquerque, New Mexico in 2008. Shane was playing for Omaha that season and I was able to get him to sign this card after the O-Royals took fielding practice. I did not own a card of Shane at that time, so I had to buy this card off of ebay. It obviously wasn't the best card to choose because of the Royals stupid black jerseys, but I was just starting to get back into autographs at that point and jersey color wasn't something that I was thinking about. You live and learn.

Shane hasn't played too much since the 2008 campaign. In 2009, he played in just one game and in 2010, he got into 14 games. He has obviously been injured, but I cannot find anything listing his injury.

It looks like the Royals failed to resign Shane and now he is going to try his luck with the St. Paul Saints of the American Association. Maybe I will be able to get a better card signed by him this season at a Wingnuts game.

I'm not sure whose fake signature is on this card, but I am pretty sure that it is not Shane's. Adam Lind would be my first guess.
at 7:13 PM