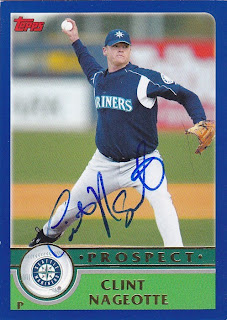 Here is another card from the most recent package that was sent my way by Paul's Random Stuff. This one features the former Mariners prospect, Clint Nagoette.

Clint was drafted by the M's in the fifth round of the 1999 draft. He moved steadily up the farm system ladder and by June of 2004, he got his first taste of big league action. In his Major League debut, Clint entered the game in relief in the third inning and he gave up four runs in four innings of work, while striking out one and walking four. He also took the loss that day.

Speaking of that loss, Clint got a decision in each of his first seven appearances. He lost his initial relief appearance, won his first start, lost his next three starts, and then lost his next two relief outings. He started his career 1-6 in seven games and never got another decision ever again. Clint got into twelve games with the M's in 2004, three in 2005, and one in 2006. That was the last time he pitched in the Major Leagues.

Clint pitched in the Mariners organization through 2006 before joining the Mets AAA squad in '07. That gig lasted just one season and Clint pitched in the Atlantic League in '08 and '09. He spent last season pitching for Edmonton of the Golden Baseball League.

While this is the first signed Clint Nagoette card that I have obtained, I did get Clint's signature once before. Clint was a 2003 Texas League All Star and I was able to get him to sign my program at the All Star game in Wichita that year. But, it is always cooler (for me at least) to have the signature on a card.
at 5:02 PM