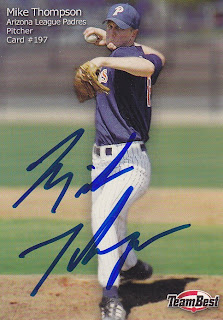 In 2007, Mike pitched exclusively out of the 'pen for the Padres and he only logged 15.2 innings of work. In that time, he had no record and an ERA of 6.90 while striking out 5 and walking 7.

After the '07 season, Mike signed with the Pirates. He pitched in the minor league system in 2008 and then apparently called it quits after the season was over.

This is the first card that I have seen from this set. The set is a little boring and it reminds me of the 1990 Best set. The only thing that changed on the front of the card between the two sets is that the 2000 set has the card number on it and the Team Best logo. I do like the idea of having guys from the Rookie Leagues in the set, though. It seems a bit odd, but at least those guys have some cards in a semi main stream set.
at 6:27 PM