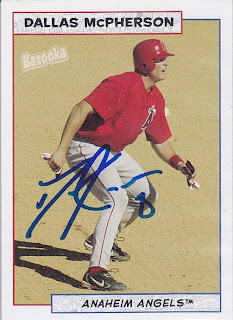 Here is a card that I got signed by the former Angels prospect, Dallas McPherson. I bought this card off of ebay in 2008. That was either before checkoutmycards.com or before I knew about the site. I bought this card because I was going to Albuquerque for a game and Dallas was playing for the Isotopes at the time, who were still affiliated with the Marlins. Unfortunately, I did not get this card signed at that game because I spent the entire time 'graphing the Omaha Royals in the visiting dugout. Luckily, I did catch up to Dallas a few months later when the 'Topes were playing in Round Rock. I had three cards in my book for Dallas to sign, but he would only sign one item. But, I am glad that he signed this card since it is the only card from this set that I have got signed.

Dallas was a top notch prospect that never panned out. He was the #12 prospect in baseball prior to the 2005 season, yet he has only seen action in 128 Major League games. The most time he saw in one season was in 2005 when he played in 61 games with the Angels. Since then, he has seen some time with the Marlins, missed all of 2009, and then played for the A's AAA team last season. He was in camp this spring with the White Sox, but they just recently sent him down to the minor league camp. You have got to wonder how much more Dallas has in his tank.

Dallas sure has an interesting signature. All I can make out of it is the "D" and his number 8. It sure looks a lot different than the one that is featured on his Baseball Almanac page.
at 6:10 PM

I still have hopes that this guy is due for a Russell Branyan-esque year or two. But it is probably too late.

I miss the Bazooka cards - they had a nice mix of veterans & prospects, plus a lot of fun inserts. Plus I love all cards that forgo the glossy finish. :-)