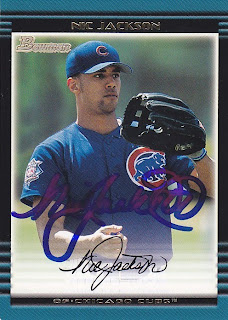 Here is a card that I picked up in a trade last year. Reader Peter, from New Jersey, saw a few 2004 SP Prospect cards that he needed for his collection and this was one of the cards that I got in return.

Nic looked like he was on the fast-track to the Major Leagues. He was a third round pick by the Cubs in 2000 and, by 2003, he had a full season of AAA ball under his belt. But, it looks like he got hurt the following season as he only played in one AAA game and thirteen Florida State League games. He then missed all of 2005.

He came back in 2006 and hit .297 in 74 AA games, but it wasn't enough for the Cubs and he was with the Mets and Phillies organizations in 2007. In 2008, he played in the Atlantic League and he has spent the last two seasons playing for the Fargo-Moorhead Redhawks of the Northern League. As of right now, Nic is still on the Redhawks roster, so there is a chance that I might see him play this summer as the Redhawks are now members of the American Association.

I have no idea where Peter got this card signed. If I had to take a wild guess, I would guess that it was signed at an Atlantic League game. How true that is, I may never find out. But, I am actually more curious as to what type of pen was used to sign the card. It certainly wasn't a Sharpie. The best guess for that is that a paint marker was used. But, whatever was used to sign this card, it sure looks unique.
at 12:01 PM

I'll help you out a little bit haha. I actually got it in a trade from someone who got it in person.

I'm wondering what it was signed with too. It's unique and pretty cool looking.

Signed in stadler lumocolor. If the air is extra humid the stadlers tend leave a matte finish.