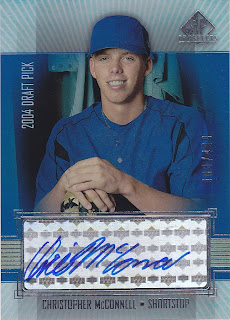 Earlier this month, I posted a Nic Jackson card that I got in a trade with reader Peter. This was the other card that was included in the trade. To land the two cards, I had to send Peter three signed SP Prospects cards from this set. The trio included Trevor Lawhorn, James Fasano, and the base Christopher McConnell card.

When Peter first proposed the trade, he said that he was trying to complete the '04 SP Prospects set. Since the three cards he wanted from me were signed, I just assumed that he was trying to get the whole set signed. But, after exchanging emails, I learned that was not the case. He just wanted to complete the set and a signed base card was just as good as an unsigned one.

In our first volley of trade proposals, I told Peter that I would trade the Lawhorn and Fasano cards to him since they are still playing in the American Association and they wouldn't be hard to replace them. I doubted that I would ever run into McConnell again, so I wanted to keep his card. But, Peter said that he would throw in this card, which had a much better looking signature on it than mine did, and I bit. So, the trade was my three signed SP Prospects cards for this card, the Nic Jackson card, and two random unsigned cards from this set.

Even though this autograph is on a sticker, the signature on it is so much better than the ballpark signature that I got from Chris. So, it was a good trade. Thank you Peter and I hope your set collection is progressing nicely.
at 7:09 PM

just to clarify, I am trying to get the whole set signed haha.

My bad, Peter. Thanks for the clarification. If I land any more this season, I will let you know.

Alright, cool, thanks a lot!