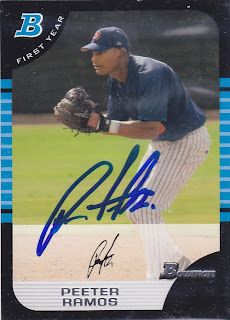 Here is the first of five 2005 Bowman Padrographs. This one features Peeter Ramos and Peeter never made it to the Major Leagues. He began his pro career in 2002 and he played in the Padres system through 2005, reaching as high as AA. He spent the next two seasons in the Phillies system, spending most of the time at AA. He did reach AAA with the Phillies, but that stint lasted just one game and two at-bats. He then spent 2008 in the Mets system before missing all of the 2009 season. He spent last season with Yuma of the Golden Baseball League.

Throughout his minor league career, Peeter is a .274 hitter with 22 home runs. He is only 29, so he might have a few more seasons left in him.

Tomorrow is Opening Day and I am looking forward to spending it in Kansas City for the first time since the 2007 season. There is a 50% chance of showers, but there isn't anything that I can do about that. If I get a chance, I will try to run a super-small contest tomorrow.
at 1:32 PM

Interesting way to spell that name, it seems Dutch. And have a great time at Opening Day.