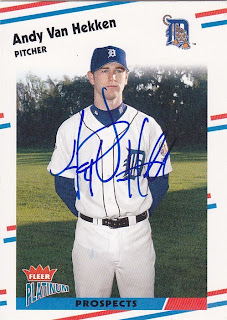 Here is a card that Paul, from Paul's Random Stuff, sent me last month. It features Andy Van Hekken, a career minor leaguer that does have five Major League starts under his belt. One of those starts, his very first in fact, was pretty awesome.

Andy made his Major League debut on September 3rd, 2002. He faced the Cleveland Indians in Detroit and, even though he gave up eight hits and walked two, none of the Indians crossed that plate that night as Andy went on to pitch a complete game shutout. While there was really nothing spectacular about his performance (he only recorded one strikeout), it is hard to top a complete game shutout in a Major League debut.

Unfortunately, the rest of his September wasn't as spectacular as the beginning, as he lost three of his next four starts and his ERA jumped to 3.00. But, if Andy never reaches the Majors again, at least he has a respectable career line of 1-3 with a 3.00 ERA and a shutout.

Since his big league time, Andy has been pitching all over the minor leagues. He had spent time in the Reds, Braves, and Royals organizations before heading to the Atlantic League for parts of three seasons. He is currently in the Astros organization after pitching all of last season with their AAA squad.

In case you thought that Andy has a very Dutch sounding name, it could be because he is from Holland (Michigan).
at 10:39 AM

Yeah, I don't remember this one either. Funny to see Fleer copy one of their not too popular earlier designs.