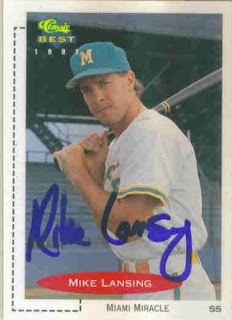 The second card from the '91 Classic/Best set is of former Expos, Rockies, and Red Sox second baseman, Mike Lansing. I got this card signed through the mail. It was most likely in 1993, his rookie season. I always liked Mike because he played his college ball at Wichita State, which is about 80 miles south of where I live.

The autograph featured on this card is different than the one shown on the Baseball Almanac page. That one is a certified autograph, so it could have been the 2000th card that he signed that day. I looked for some autos from him on ebay and most of them look the same. The last names all looked similar to mine. But, none of them had the loop in the M of his first name like mine does. I got another card signed through the mail around the same time and it's signature looks just like this one. It's hard to imagine that a rookie in Montreal in the early '90s would have a ghost signer.

This card is cool because it features the old Miami Miracle. The Miracle were an independent team that played in the Florida State League. I guess that this was the time before indy leagues and there were a few teams that played in a minor league that weren't affiliated (the Peninsula Pilots were another). This is unheard of today, but this team spent seven seasons (four as the Miami Marlins) in the FSL as an independent team. Lansing is the only player from the '91 team to ever make it to the Majors. How about the teal and yellow uniform? That belt really stands out.
at 8:37 PM

That belt IS incredible, wow. How hard would it be to even find a belt of that color!? Unless they bought a bulk lot of them on clearance or something, I'm thinking they were a special order. A very bold statement.

Also, I would love to see a zoomed out shot of the full uniform ensemble. And what were the road uniforms like? I wonder if they had full color batting practice jerseys or not. Now those would be a sight to behold.

It's hard to imagine that a rookie in Montreal in the early '90s would have a ghost signer.

Completely agreed. Do you think he changed his signature over time? Maybe as he got older and kept signing, he was like, "Screw this, I'm ditching the loopy M"

Here's a picture that I found on ebay that show the front of the jerseys.

The M in the signed photo even had the loop in it.

That is seriously awesome...thanks for sharing. The looped M is a good sign, too (no pun intended).