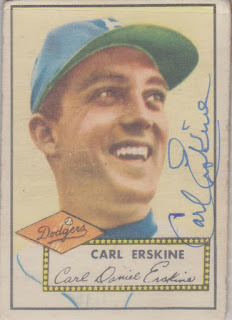 In that first post many moons ago, I mentioned nothing of Carl's playing career. Back then, it was all about how I got the card signed. But, Oisk had great career, all spent with the Dodgers. He suited up for them for twelve seasons and got to call Brooklyn and Los Angeles home. He finished his career with a 122-78 record with 13 saves and a 4.00 ERA. He made one All Star team and pitched in five World Series, winning it all in 1955.
at 10:34 PM

Awesome card! It's crazy how much different the signatures are from the ones printed on the cards on all of the 52 Topps you have posted. Congrats on the new puppy! Hope you and the family are doing well, hit me up the next time you're in town so we can grab a beer and catch up.