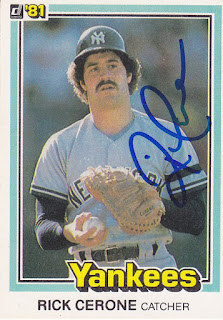 I know I said that I was going to be posting some vintage cards, but that was before the mailman stopped by yesterday. I got one card in the mail yesterday and it was this card. This may just look like a standard signed 1981 Donruss card to you. But, for me, this is my 100th card from the set that I got signed! I finally reached my goal of hitting the century mark. It took me five years to do, but I finally did it.

I had no idea that Rick Cerone played in the Majors for eighteen seasons. He broke in with the Indians in 1975 and he final season was spent with the Expos in 1992. Between those years, he also spent time with the Blue Jays, Yankees, Braves, Brewers, Red Sox, and Mets. His best season came in 1980 with the Yankees when he had career highs in games (147), doubles (30), home runs (14), and RBI (85).

I sent this card to Rick on the 17th of this month and got it back eleven days later.

Now, I do not know what I am going to do. I still have a couple of '81 Donruss cards out in the mail, so I am not going to just stop collecting them. I would try to get the whole set signed, but that would just be frustrating since there are a number of deceased players in the set. So, for right now at least, I am just going to bump my goal up to 200 signed cards from the set. Maybe I will hit that mark another five years from now. 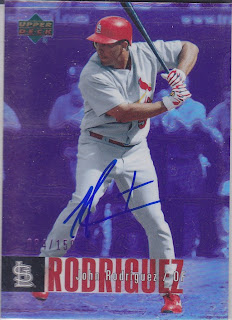 Here is a card that I got signed at my first Wingnuts game I attended this year. The Nuts hosted the Cam-Am League's New Jersey Jackals that night and I took 36 cards with me to get signed. To my amazement, I came home with 36 autographs that night, which is still my best autographing day of the year. In fact, that is probably my best day ever considering that I went 36-36.

John was the Nuts big signing this year. By big, I mean that he actually had Major League experience. He got 332 at-bats with the Cardinals in 2005-2006 and he hit .298 with them with 7 home runs and 43 RBI. After 2006, it was back to AAA for John and he played at that level through 2009. Since then, it has been a mixture of indy ball and the Mexican League.

John was a major contributor for the Nuts this season. He hit .332 with 16 home runs and 81 RBI. He is even helped out in the community by offering hitting lessons at Lawrence Dumont Stadium. Sure, he charged a fee for the lessons, but it was still a unique opportunity for people in the area. Since his family did not make the move with him to Wichita, I guess he has some free time on his hands.

This is the only card from the '06 Upper Deck Special F/X set. I had never heard of the set before I got this card and just assumed it was a subset in the base Upper Deck set. But, thanks to Check Out My Cards, it appears that this was a stand alone set. I guess you learn something new every day. 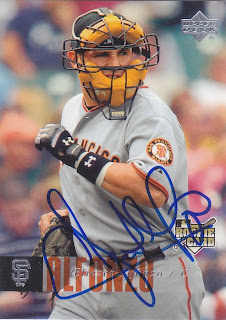 Here is a card that I got signed last summer on my trip to Colorado Springs. Eliezer was playing for the Colorado Springs Sky Sox at the time and he signed both of my cards for me prior to the game starting.

I had never heard of Eliezer before I went to that game. So, when I just checked out his stats, I was really surprised to see that he has spent some time in the Big Leagues in six different seasons. He made his Major League debut with the Giants in 2006 and had a pretty good rookie campaign. He got into 87 games that season and he hit .266 with 17 doubles and 12 home runs while tallying 39 RBI. His OPS was a very respectable .767.

Even though Eliezer is a .240 career hitter in the Majors with almost 600 at-bats under his belt, he could not land a gig with an affiliated team in 2012. Instead, he took his services to Mexico. Sounds like Eliezer might be a candidate for the independent leagues next season.
at 11:06 AM 1 comment: Links to this post 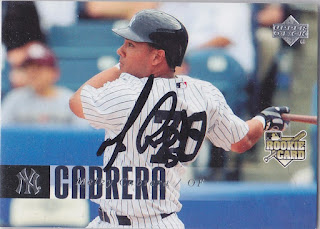 It is hard to believe that I was actually looking forward to writing this post just a couple of months ago. Around that time, Melky was a league leader is batting average and was just coming out of the All Star game as the MVP of the game. I, on the other hand, was only about eight cards away from posting this card and should have had it posted no later than two weeks after the game.

Then, a thing called life got in the way and it took me two months to get eight cards posted and the Melk Man had to get busted for taking testosterone. Damn you, life!!

So, anyways, here is one of the two Melky Cabrera autographs that I have in my collection. Melky was with the Royals in 2011 and I was able to get this card signed at Royals Fanfest prior to that season.

I actually took my time deciding which Yankee card I wanted to get signed by Melky and I put some serious thought into it. I eventually chose this card because of all of the open space and the lack of a facsimile autograph on it. Then Melky got a hold of it and signed his tiny signature on the only dark part of the card. Damn you, Melky!

In Melky-related news, the Melk Man, who technically still leads the league in batting, will not win the batting crown this year. There is some weird rule that would have allowed him to win it by giving him one "hypothetical" at-bat to qualify for the 502 at-bats needed to win the crown. But Melky, being the stand-up guy that he is, asked that the provision be waived this year so that the award would not be tainted. The Players Association and Commissioner's Office complied.
at 7:32 PM No comments: Links to this post 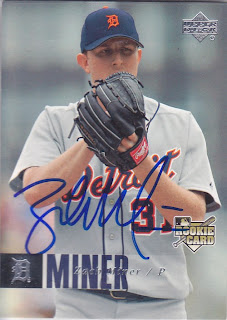 Here is a card that I got signed in Omaha last summer while Zach was pitching for the Omaha Storm Chasers. He was hurt for much of last season and spent his time split between AA, AAA, and the disabled list. He must have been recently promoted back to AAA when I was there because the locals I was standing by were not sure who he was. I got lucky and took an educated guess and was rewarded with three signed cards by him.

Last season was Zach's only season in the Royals organization. He was originally drafted by the Braves and he saw his only Major League time with the Tigers. He pitched for them from 2006-2009 and posted a 25-20 record with a save and a 4.24 ERA.

This season, Zach found himself back in the Tiger organization again. He spent a majority of the time relieving for the AAA Toledo Mudhens and he finished the season with a 2-0 record with 2 saves and a 2.50 ERA.
at 6:58 PM No comments: Links to this post 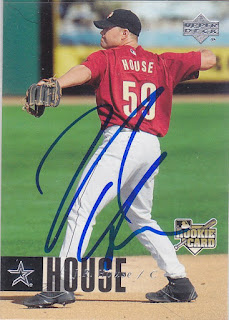 Here is a quick post showing the third and final JR House card that I have posted on here. This autograph was obtained in Des Moines in 2009 in between games of a doubleheader. JR was playing for the Omaha Royals at the time and he was nice enough to sign all three cards that I had of him.

You can see the first JR post that I did here and the second one here.

As pointed out by Paul, of Paul's Random Stuff, on the last JR House post, JR was the hitting coach for the Missoula Osprey this year. The Osprey are the D-Backs rookie level team and JR must have done an alright job as they are currently playing for the Pioneer League championship.
at 7:19 PM No comments: Links to this post 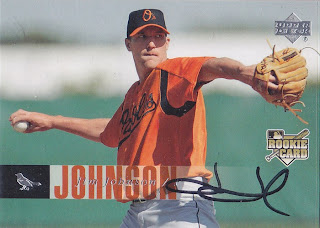 Here is a card that I got signed at Kauffman Stadium earlier this summer. I went to a Thursday day game that day and Jim is one of the few pitchers that signed. I asked him to sign after he got done getting his work in and all he did was point to the dugout. I wasn't sure if that meant that he was going into the clubhouse or if he was going to sign over there. Since I get cards signed instead of baseballs, the dugout is not one of top choices to get autographs because you have to throw the stuff you want signed over the dugout to the player. So, I just stood where I was to see what was going to happen.

When Jim got to the dugout, he started signing balls for people. I was a little weary, but I made my way over there anyways. On the way, I saw a guy throw Jim a hat to sign. His throw, however, came up a little bit short and the hat landed on the dugout. Jim just leaned forward a bit and grabbed that hat pretty easily and I then had an idea. I didn't need to toss my card book the whole seven or eight feet to Jim. I just had to lob it about four feet onto the top of the dugout. That is what I did and Jim signed all three cards for me. He then winged the book back at me and I thought for sure that I was going to lose at least a card or two, but that was not the case. I really do not like throwing my card book.

Jim is having an impressive season, so far. Through 134 games, Jim has racked up a career-high 41 saves. He is currently tied with Fernando Rodney for the Major League lead in that category.
at 8:21 PM 1 comment: Links to this post