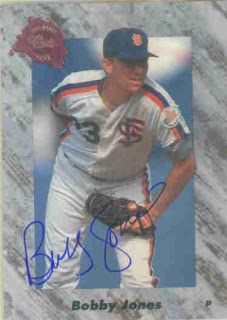 This card came from the first ever set of Classic Four Sport. The set included nothing but draft picks from the four major sports. I liked the look of them, even though they had some thick borders. At least they allowed the player's photo to overlap the border. This is the only card from the set that I have signed, but I hope to get one of the hockey cards signed by March.