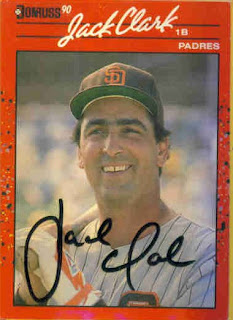 This is a great autograph that Rod gave to me. Jack Clark was probably a little underrated when he played. He lasted 18 seasons and clubbed 340 home runs between 1976 and 1992. That's pretty good for that era. Plus, he had 20 or more homers in 11 of those seasons. And with his ability to take a walk, he had a career OBP of .379 and an OPS of .854. That OPS is very good for that era. George Brett had a career OPS of .857. Jack made four All-Star teams and played in one World Series in 1985 as a Cardinal.

These Padrographs are starting to catch up with where I am. Well, I have another '90 Donruss, four '90 Fleer and three '90 Upper Deck. After that, I should be caught up so I can get back to doing one post a day.
at 10:10 PM