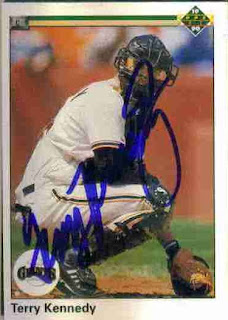 This is the third and final card of the San Antonio Missions batting coach, Terry Kennedy. You can see the first one here and the second one here.

This is little off topic, but I couldn't resist. Apperantly the San Diego Surf Dawgs, of the Golden Baseball League, have offered Rickey Henderson one million dollars to go into the Hall of Fame with a Surf Dawg hat on his plaque. This is a mute point since Rickey won't have the chance to pick his cap. For those that don't know, Rickey played for the Surf Dawgs in 2005 after no Major League team team would sign him. The Dawgs won the league championship (which consisted of a four team, double elimination tournament) that year and Terry Kennedy was their manager. Anyway, you can read more about it here.
at 9:19 PM