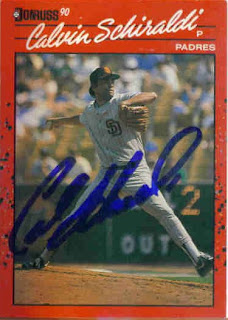 All in all, he was a pretty average relief pitcher who had a couple of really good years. So why did he bounce around every couple of years? Was he not a very good teammate? Or was he good trade bait? After all, he and another player got the Red Sox Lee Smith and was traded from the Mets to the Sox to the Cubs to the Padres.

Calvin was the losing pitcher in games six and seven of the 1986 World Series.
at 8:48 PM

Schiraldi had a great fastball, but he was rather wild. Maybe that was it.

That's a good point. I didn't even bother to look at his walk numbers.