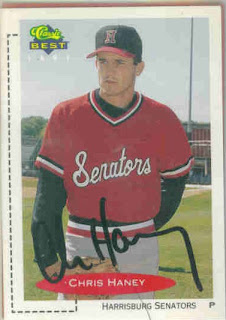 I got this card signed at a Royals Caravan, probably around 1993. I think that it was in January of '93 because I got two cards signed, and he was an Expo in both of them (or in this case, an Expo minor leaguer). He made 7 appearances with the Royals the previous summer after coming over from Montreal, so I probably didn't have any Royals cards of him yet. This particular caravan, like most of the early ones, took place at the mall. This was how autograph collecting was for a 13 year old in central Kansas in the early to mid '90s. It was this once a year event and getting autographs through the mail.

I do like that jersey. That uniform is kind of a carry-over from the '80s with the belt-less pants and pullover jersey.
at 9:58 PM