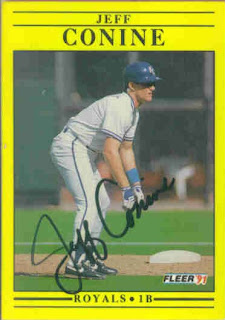 I got this card signed through the mail, probably in 1993 or '94 while he was with the Marlins. Jeff had a pretty long Major League career that ended after the '07 season. In Spring Training of '08, he signed a one day contract with the Marlins so that he retire a Marlin.

I was kind of surprised when I looked at his stats. He didn't reach 2,000 hits for his career. He only hit over 20 homers twice and he only reached the 100 RBI plateau once. He was a two-time All Star for the Marlins, though. I guess that I never really paid too much attention to Conine. He was a steady player that could play the corner outfield and infield positions. He never broke the bank during his career, but he made a lot of money. And according to his Wikipedia page, he is a world-class racquetball player and is starting to get into triathlons.

Interestingly, Conine did two stints with the Royals, Marlins and Orioles.

I like the photo on this card. For one, you can see the old astroturf that used to be at the K. Plus, you can see a reliever hanging out in the bullpen in the background.

Oh, I also want to thank Night Owl Cards for sending a couple of cards from my want list. Thanks Night Owl!
at 11:16 PM