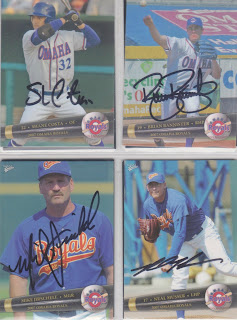 At Royals Fanfest in 2009, the Omaha Royals had a booth set up. They had a bunch of freebies sitting on their table, including random cards from this 2007 team set. Neal Musser and Shane Costa were both at Fanfest that year and, since I only had one card of each, I made sure to grab their cards. I also grabbed the Bannister and the Jirschele. I am not really sure why I grabbed the Jirschele. It was probably because he was the AAA manager and he usually gets called up to the big leagues after the AAA season is over. Either way, I grabbed four cards and I was able to get all four signed in 2009. I got Costa and Musser at Fanfest, Bannister at the Royals Caravan, and Jirschele after an O-Royals game in Des Moines.

I really like this set. Though the photography needs some help to make it look less "foggy", the layout is really good. I love the way the bat is used for the name, position, and team. The fact that it is a black bat makes it even better. Multi Ad did a good job with adding the gold ring on the bat that matches the font color.

Out of all of these guys, Jirschele is the only one that is still in baseball. Musser and Bannister have not pitched since 2010 and Costa last played in 2012. Jirschele is currently the third base coach for the Royals.

This is the last card of Shane Costa that I have to post on here. You can see his first one here and the second one here. There will be one more Neal Musser, a couple more Mike Jirscheles, and quite a few more Bannisters.
at 11:47 AM