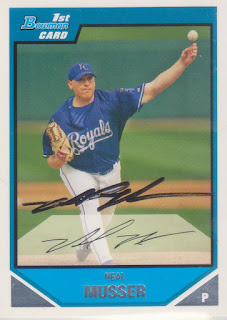 Here is a card that I got signed at Royals Fanfest in 2009. It is kind of strange that Neal was even at Fanfest that year. For starters, he only appeared in one Major League game the previous season. Then, about a month after Fanfest, Neal got released by the Royals really early on in Spring Training.

Unlike some of the guys that I have got to sign their 2007 Bowman cards, Neal did get a little bit of big league service time. He made his Major League debut with the Royals in 2007. That season, he got into 17 games and went 0-1 with a 4.38 ERA. He struck out 19 and walked 14. Neal then pitched one scoreless inning in 2008 and that was the extent of his Major League career.

After that season, he spent some time with the Astros AAA team and the independent Lancaster Barnstormers. He retired after the 2010 season.

I only saw Neal pitch one time with the Royals and it was not a good outing. In one inning of work, Neal gave up four runs on four hits to the A's. The Royals were already down 12-3 when they brought Neal in and then bad went to worse.

On the College World Series front, two team have been sent home. I hope nobody had Arkansas or Cal St. Fullerton making it to the finals.
at 9:23 PM

Zach I will try and meet you at the Hops game on July 10.