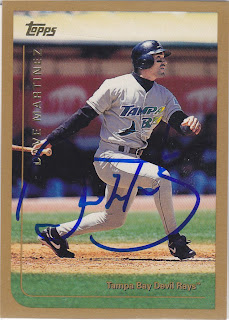 This is the fifth and final Dave Martinez card I have to post (unitl I see the Rays play again, at least). This one was obtained in September while I was at a Baltimore Orioles game. You can see the first three, which I got signed in Kansas City in 2008, here, here, and here. The fourth one, also obtained in Baltimore, can be seen here. I now have signed cards from Dave as a Cub, Expo, White Sock, and Devil Ray. I guess that the next time I see the Rays, I will be looking for a card of Dave as a Red, Giant, or Brave.

Here is a fun fact about Dave Martinez. In 2000, Dave played for four different teams. He started out a D-Ray. After 29 games, he was traded to the Cubs for Mark Guthrie. 18 games later, the Cubs shipped him to the Rangers for Brant Brown. 38 games later, he was dealt to the Jays for Peter Munro. That has got to be some kind of record.

Here is another fun fact. Dave pitched in two Major League games. The first one was in 1990 as an Expo. In that game, he pitched a third of an inning and gave up two runs on two hits and two walks. He pitched again for the White Sox in 1995. In that game, he pitched one scoreless inning and gave up no hits and two walks. In the two appearances, he had no strikeouts. His career ERA is 13.50.
at 8:13 PM

It's impressive that you have a card signed of him on so many different teams. I hope you can get the last three this season!

Thanks Ryan. Since I try to take three cards of each player, I try to mix up the teams as much as possible.