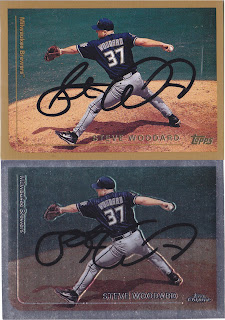 I got both of these cards signed at the same time. Since they are practiaclly identical, I figured that I would put them into the same post.

I got these cards signed in Round Rock, Texas in 2008. Steve was in town with the visiting Isotopes. I got the cards signed after the game. This was the game that Steve was thrown out of before he even threw one pitch.

Of the three cards he signed for me, the regualr Topps card has the best signature. I'm sure Steve wasn't in the best of moods after getting tossed, so I am fortunate to even have one of the cards signed. Plus, it wouldn't have happened without the help of the EMT.

For some reason, my dad bought me a box of '99 Topps Chrome for my birthday that year. I hadn't opened a box of Major League cards since maybe '94 or '95, so I thought that it was kind of a strange gift. I was in college at the time and was only buying a pack here and there. Since I was a poor college student, I was actually hoping for some cash. But, I got the box of Chrome instead. Looking back now, it is actually a neat gift since I have very few cards from this era.

On a side note, I placed an order through checkoutmycards.com on Thursday and I paid ten dollars extra on shipping to make sure I would get the cards by this coming Thursday. I got the package in today. I was shocked. With the standard shipping charge, their site says the items will be packaged within three to five business days. With the priority shipping charge, which is what I got, it says the items will be packaged within two business. To have my cards not only packaged in two days, but also shipped to my house in two days, is truly amazing. Two Sharpies up for checkoutmycards.com!
at 4:48 PM

Those look nice next to each other.