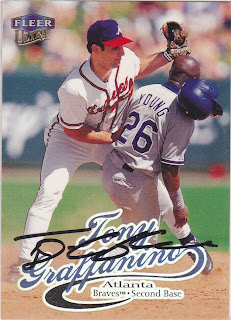 Todays autograph is from journeyman utility infielder, Tony Graffanino. During his 13-year Major League career, Tony has played for the Braves, Devil Rays, White Sox, Royals, Red Sox, Brewers, and Indians. He has played every position in the infield multiple times and has even logged six games in left field.

I have personally seen Tony play in 14 games as a White Sock, Royal, Brewer, and Indian. In those games, he has played all four infield positions and has even pinch hit. The most amazing thing about it, though, is that Tony was 20-49 (.408) in those games with 11 runs, 11 RBI, 5 doubles, a home run, and a stolen base. Maybe if I would had seen him play in person many more times, he would be more of a household name.

I got this card signed last April when the Indians were in Kansas City. Tony only played in seven Major League games last year, so I am glad that I was able to catch him in that window. Since he was a former Royal and that was my first game at the "new" Kauffman, I asked him what he thought about it. He replied that it looked great and then signed my three cards.
at 10:39 PM

He should have been paying you to go to all his games!

I've always been a fan of his name, it rolls off the tongue pretty easily.