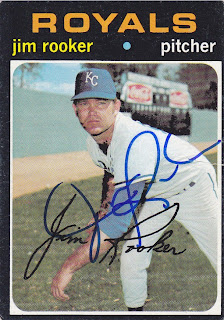 This is the oldest card that I got signed at Fanfest and it is now my oldest signed Royals card. The older Royals don't usually come to Fanfest, so it was neat to see Jim there, even though I had never heard of him prior to the event.

Jim was an original Royal. He appeared in two games for the Tigers in 1968 and then was taken by the Royals as the sixth pick in the expansion draft. For the first-year Royals, he appeared in 28 games and made 22 starts. He finished the season 4-16 with a 3.75 ERA, 73 walks, and 108 strikeouts. He also hit .281 that year with 3 doubles, 4 homers, and 0 sacrifice bunts. In fact, his first two home runs came in the same game and they were both off of Jim Kaat.

I got two more cards signed by Jim and I will post both of them on Wednesday. Because of that, I am cutting the Jim Rooker story short. That way, I'll have something else to say on the next two cards.

I bought this card off of checkoutmycards.com. I had no idea how hard it is to find high numbered cards from the early '70s. This one cost me about two dollars and it isn't in the best of shape (you can see where the Sharpie tripped over the crease on the right side of the card). Plus, and I didn't notice it until I had the card in hand, the printer kind of overdid the black on the card. Oh well, it's always fun to have a card that has a little bit of personallity.
at 4:35 PM

Autos on the older cards are really nice. That's a nice one for your collection.

Early '70s high-numbered cards aren't that hard to find, unless you want them in terrific shape. And then it gets expensive.

What would be the average cost for a common high number and for an average high number in good condition?

Highest of the high numbers in quite nice condition will run you about 10 bucks each for the commons.

I'm sure you can find them in not as good condition for a lot cheaper, although I have mostly looked for cards in excellent shape, so I'm not as familiar with that.