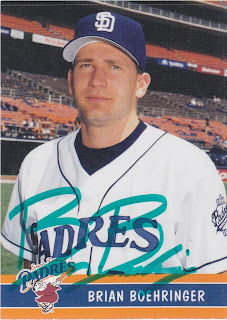 This awesome card is another Padrograph from Rod. If it wasn't for Rod's generosity, I would probably only have about ten signed Padre cards. But because of him, I have well over a hundred and more than any other team besides the Royals.

I'm guessing that this card came from a Padres team set. Oddball cards like this are tons of fun and are great cards for getting signed. I wish that the Royals would give out cards like this.

Brian pitched in the Majors for ten years with the Yankees, Padres, Giants, and Pirates. He was mainly a middle reliever, though he did start 21 games during his career and he recorded 3 saves. He never made an All Star team, but he did pitch in two World Series. 2004 was Brian's final season in the Major Leagues and 2007 was his last year in pro ball.

Boehringer spent a little time in the Atlantic League, but he was very skilled at avoiding autograph seekers. I'm not sure I ever even had the chance to ask him & I know I never got his autograph.

That's a lot of name for one card.