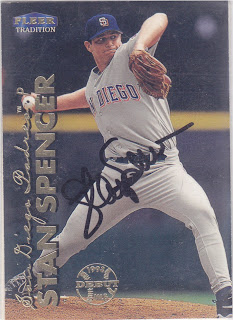 Here is a Padrograph of Stan Spencer. Stan's Major League career spanned parts of three seasons and 23 games at the end of the last millinium. He was a former first round pick by the Expos and a Rule V pick of the Marlins. But, the only Major League team that he played for was San Diego.

Stan's career record is 3-9 with a 5.54 ERA and 107 strikeouts. Having pitched 118.2 innings, he was nearly a strikeout an inning type pitcher. His one drawback was giving up the long ball. In 38.1 innings in 1999, Stan served up 11 dingers. That's less than one every four innings and it helps to explain his 9.16 ERA that season. Some of the guys that hit home runs off of him that season include Barry Bonds, Jay Bell, Derek Lee, Robin Ventura, Mike Piazza, and Bobby Abreu. At least most of them came from some sluggers.

This is my earliest card from Fleer Tradition. Is this what they called their base set or did they not even have a base set at that point?
at 9:45 PM

I was not collecting in 1999, but I can't find anything that looks like a plain Fleer card from that year on Beckett.