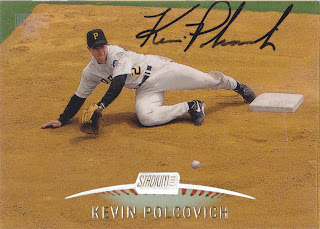 This beautiful card was sent to me by the Collective Troll. It is the only '99 Stadium Club card that I own and I think that, based on this one card, I missed out on that set. This card looks great and I would hope that the rest of the set would look just as good.

As for Kevin, he was a 30th round draft choice for the Bucs out of the University of Florida. In his sixth year of pro ball, Kevin got called up to Pittsburgh. He got into 84 games that year and he hit .273 with 4 homers and 21 RBI while mostly playing shortstop. One of his homers was off of Curt Schilling.

The next season, Kevin was on the big league roster all year. But, in 81 games, he only hit .189. That was his last season in the Majors. After that, he played two more years in AAA and one year that was split with an indy team and a AA team.

Even though his final big league season was less than spectacular, at least this great looking card came out of it.

Also, there is still time to claim a spot in the previous post. If there isn't any more selections by 9:00 central time tonight, feel free to grab more than five slots.
at 1:58 PM

That is an awesome looking autograph on a great card. I missed this set too.

I second Mr. OM. That is a great looking card and he signed it in a good spot. It doesn't interrupt the action

Nice card & nice autograph, but I've never heard of Mr. Polcovich before in my life. :)

Zack, I cant believe you are still posting out of that batch of cards! That is a nice set, I just posted a card from it, too. Polky was a great guy and a decent player, but he would have likely been a career AAA guy if he didn't play for the Bucs. They banked on Chad Hermansen to be the shortstop of the future and when he didn't pan out and Abe Nunez wasn't quite ready they were stuck.

Troll- I still have at least one more card from that stack. It should appear sometime next week.

As for this card, everything is perfect (and horizontal) about it. The card is horizontal as well as the signature, the player, and the player's name. This may be one of the best looking autographed cards ever!

That's one of the nicest on card autos I've seen on here Zack. Very nice.