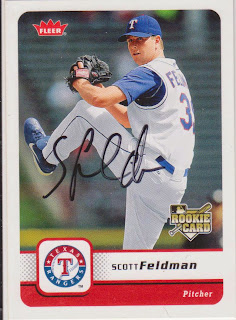 Here is a card that I got signed outside of Kauffman Stadium in 2013. Scott was playing for the Orioles at the time and he signed this card for me after arriving to the ballpark in a cab. He actually signed three cards that day. I had gotten him about five years before that and he only signed one, so I was pretty happy to get three from him in 2013.

Scott has been pitching in the Majors since 2005 and spent most of the time with the Rangers, though he also played with the Cubs, O's, and is currently an Astro. He pitched out of the bullpen during his first three years before becoming a starter in 2008. In 2009, he had a great year, winning 17 games and striking out 113, both career highs.

Last year was his first season in Houston and he did really well. Though he was just 8-12 for a young Astros team, he did record a 3.74 ERA and had his second 100 strikeout season. So far this year, Scott is 1-2 with a 5.09 ERA. After a rough second start where he allowed 7 earned runs in 5 innings, he settled down yesterday and yielded just 2 runs over 6 innings to record his first win of the year.
at 9:01 PM