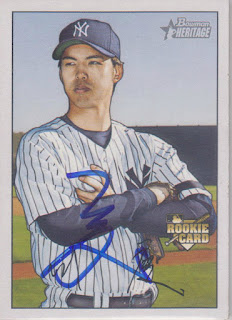 Here is a card that I got signed at a Scranton/Wilkes-Barre Yankees game in 2009. Kei was charting pitches in the stands that game and was pretty easy to identify out of his uniform. So, I went up to him between innings and he signed all three cards that I had of him.

Kei came to the States from the Hanshin Tigers in Japan's Central League. He pitched for them for eight seasons and won 86 games for them while only losing 60. His best season for the Tigers was the 2003 season when his 20-5 record lead the team to the Central League pennant. Kei posted a 2.80 ERA that season and struck out 179 batters. Those numbers earned him the MVP Award and the Eiji Sawamura Award, which is the Japanese Cy Young Award.