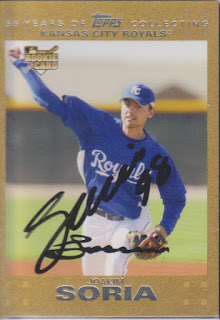 I can't believe that this is the first card of Joakim Soria that I have posted on here. Joakim was a mainstay at the Royals closer position for four and a half years before requiring a second Tommy John surgery early in 2012. Rather than pay him $8 million to finish his recovery and pitch in the second half of 2013, the Royals declined his option and Soria became a free agent. He moved on and has played with three other teams before rejoining the Royals last month. And it took him coming around full circle before I would finally post a card of him.

The Royals selected Soria in the Rule V draft from the Padres prior to the 2007 season. It seemed like a long shot for him to make the club out of Spring Training, considering that he had only pitched in 16.2 innings of affiliated minor league ball. Plus, those innings were over two seasons that were separated by four years and his initial Tommy John surgery.

But, Soria overcame the odds and made the club and lasted with the team all season. He pitched 69 innings that season and went 2-3 with 17 saves, a 2.48 ERA, and 75 strikeouts. Add in the fact that he went on to save 160 games for the Royals in his initial go-around and I think it is safe to say that he is the club's best Rule V pick ever. He might just be the best reliever ever selected in that draft.

I got this card signed at Royals Fanfest in 2011. I think I have nine cards signed by Soria, but this is the best looking signature in the bunch. All of the signatures I have from him are an "S" followed by a straight line. This is the only one that has some actual squiggles after the "S".
at 9:14 AM