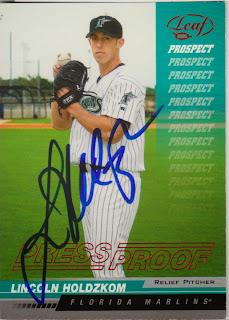 Over those first two posts, I talked about Lincoln's tenure in affiliated ball. That all came to an end after fourteen games with the Altoona Curve in 2009. At that point, it looked like Lincoln had retired. But then the Wichita Wingnuts came knocking at the door in 2013 and he decided to give it one more try.

On an unrelated note, I got two autographs in the mail today. I only sent out about six cards to Spring Training this year, so it was nice to get a third of those back today. I now have two signed cards from the 2015 Topps set.