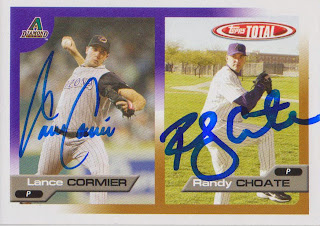 This card pretty much has the same story as the last one I posted. Lance Cormier signed this card for me at a Royals game in 2009 while he was with the Rays. I posted the card with just his signature four years ago and it can be seen here.

After staring at this card with just Lance's signature on it for three years, I could not take it anymore. So, I sent the card to Randy to see if I could get him to finish it for me. When Lance signed the card, he was still a teammate of Randy's and he said that their lockers where side-by-side. When one of them got this card to sign in the mail, he would go ahead and have the other sign it too. I figured that was a pretty good indication that I would get the card back, so I sent it off. I am not sure why I waited three years to do it though. I sent this card to Randy when he was with the Dodgers and he had it back to me two and a half weeks later.

Randy has been pitching in the big leagues since 2000. He has played for the Yankess, Diamondbacks, Rays, Marlins, Dodgers, and Cardinals. He is beginning his third year as a Cardinal and will be forty years old at the end of the season. He had an off year last season, but put up some good numbers in 2013. That year, he was 2-1 with a 2.31 ERA in 35.1 innings of work. Randy is a left-handed specialist.

Speaking of left-handed specialists, is LOOGY still used anymore? Ten or twelve years ago, I heard that term a lot. Now it seems like I have not heard it in years. It could be because I do not have cable, though.

LOOGY stands for Left-handed One Out GuY
at 1:32 PM