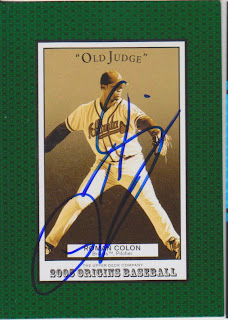 Here is the second and final card that I had to beg Roman Colon to sign for me. The first one, and the story of how I got them, can be seen here.

Roman has not pitched in the big leagues since 2012. He pitched for three different AAA teams in 2013, but did not pitch last year. Yet, somehow he is on the roster for the Royals AA team in Arkansas.

This card may be from the ugliest set that came out in 2005. From what I can tell, the set recreates the Old Judge cards and one of the Play Ball sets. Both of the original sets were smaller than modern cards. Rather than making the cards the original size, Upper Deck made them standard size with massive green (and some other colors) borders. The Play Ball cards were bigger than the Old Judge, so the borders on those cards aren't as bad. But this card looks absolutely hideous.
at 10:28 AM