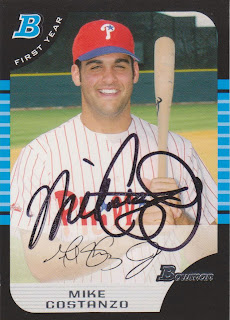 Here is another card that was sent to me by Ryan, from The Great Orioles Autograph Project, a few years back. When I first got this card, I had not heard of Mike Costanzo. So, I just figured it was another Bowman card of a guy that never made it. It turns out I was wrong.

Mike Costanzo played in 17 games for the Reds in 2012. He was used as a pinch hitter or defensive replacement in all but two of those games. In those games, he got 18 at-bats, but recorded just a single hit (.056). He drove in 2 runs, both on sac flies, and he walked twice while striking out 10 times.

After that, it was back to AAA for Mike. He finished up the season in Louisville before joining the Nationals organization via free agency. He lasted with them until getting released in July of 2013. The Reds picked him back up and he spent the past season and a half back in Louisville.

Mike's Major League page says he is signed right now, but I can find no evidence that backs that up. He is not listed on the Bats roster. After searching, without much luck, I came across an Italian baseball site. Mike played for Team Italy in the 2013 WBC and, according to the loose translation on the site, Mike is without a team right now. He sounds like an Atlantic League candidate to me.
at 8:42 PM