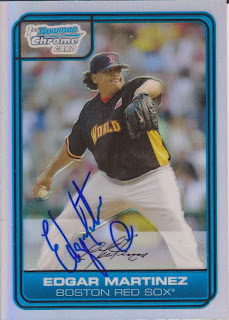 Unfortunately, this is not an autograph of that Edgar Martinez.

This is from the career minor leaguer that happened to play for the Wichita Wingnuts in 2012. As you can see from the card, he used to be a legitimate prospect, having played in the 2006 Futures Game. That aspect was short-lived as he was out of affiliated baseball after the 2008 season.

I got this card signed prior to a 'Nuts game that season. When Edgar was signing the card, one of his teammates came over to see the card of him. He told that teammate that the picture was from "his Pedro Martinez days". They both got a good chuckle out of that. A few minutes later, that teammate came back over to see if I had any extras of the card. All that I had got signed that day. I offered one of those up, but he didn't want a signed one. I told him that I would get him later on in the year and I did just that. When I finally got Edgar his card, I had him sign my boy's glove that day and the kid still thinks that Edgar and I are buddies.

In 2005, Edgar posted a 1.89 ERA over stops at high-A and AA while striking out more than a batter an inning. The following year, his ERA was 2.61 in AA while his strikeouts dipped below the one per inning mark. He was bumped up to AAA for 2007 and he responded with a 5.16 ERA and 58 strikeouts in 68 innings. His ERA dipped down to 3.89 in AAA in 2008 as the Sox toyed with the idea of making him a starter. But, his strikeouts per inning dropped even more that season and they decided to cut ties.

Edgar joined the independent ranks the following season and pitched in three different leagues over the next four years. He has spent the past two seasons pitching in Mexico. He had a really good season for Oaxaca last year, posting a 1.49 ERA in 48.1 innings of work while striking out 44 with just 11 walks.
at 10:45 PM