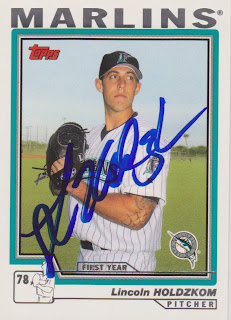 Here is a card that I got signed at a Wichita Wingnuts game in 2013. Lincoln was playing for the 'Nuts and I got the cards signed prior to a game early that season. Lincoln was impressed to see some old cards of himself and stated that they were from "back when he was going places".

Lincoln was drafted by the Fish on the seventh round of the 2001 draft. In 2003, the year before this card came out, he split the season between A ball and high A. He finished the season 1-6 with 6 saves and a 2.89 ERA. He pitched exclusively out of the bullpen and struck out 94 batters in just 71.2 innings. I am sure it was those strikeout numbers that prompted Topps to put out this card.

Unfortunately, Lincoln missed the entire 2004 season. So, when this card came out, he wasn't even playing. He came back in 2005 and was only able to appear in 12 games, which were split between the Gulf Coast League and the Florida State League. In the FSL, he pitched 9.1 innings and struck out 9 with a 5.79 ERA.

The Marlins released him after that season.
at 4:12 PM