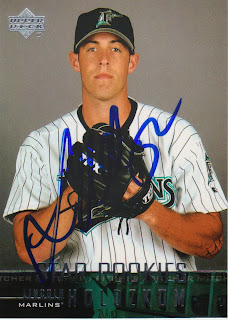 Here is the second of three cards that Lincoln signed for me at a Wingnuts game in 2013. The first one was posted last week and should be just a couple of posts down from this one.

In the previous post, I talked about Lincoln's time with the Marlins. Things were on the up-and-up for him until he hurt his arm and missed all of the 2004 season. The Fish cut him loose after 12 appearances in 2005.

The Cubs took a flyer on him the next year and he split time between their Rookie, High-A, and AA teams. He spent the most time at AA and went 2-3 with a 1.95 ERA over 32.1 innings. But, he struck out just 27 batters compared to 74 in 57 innings the season before his surgery. The Cubs let him go after that season and Lincoln caught on with Boston for the 2007 campaign.

Lincoln pitched in the Red Sox organization for two seasons and spent most of it in AAA. In his initial run at that level, he had a 1.59 ERA in 17 innings of work. But, his ERA ballooned to 5.33 the following season and the Sox let him go. He played one more year of AA in the Pirates organization before hanging them up.
at 10:10 PM