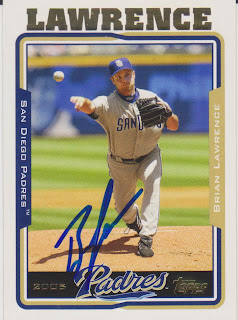 Here is the second card of Brian Lawrence that I have ever posted on here. The first one was posted way back in 2010. It was given to me by Rod, from Padrographs. This one, on the other hand, I got in-person at Spring Training last year. Brain was the pitching coach for the Cub's Boise Hawks last year. The Cubs no longer have Boise as an affiliation, but Brian has the same role with their new team, the South Bend Cubs.

When I posted the previous card of Brian, he was a free agent after pitching for the Marlins AAA team in New Orleans. Brian got picked up by the Angels the following season, 2011, and he pitched for their AAA team in Salt Lake City. He went 2-5 with a 8.07 ERA over 7 starts before getting released. He retired from playing after that season.

Brian became a pitching coach the following season, starting out with the Normanl CornBelters of the Frontier League. He then coached for the Lake Elsinore Storm before joining the Cubs minor league coaching staff last season.

The two Brian Lawrence cards that I have posted on here have slightly varied signatures. I know when and where this card was signed. I cannot say that for the previous card. It is entirely possible that that card was signed way back in 2004 and Brian's signature has changed a bit over the past decade. I would say that is probably the case after looking at some Brian Lawrence autos on COMC from 2003.
at 5:34 PM