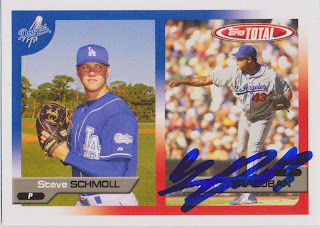 Here is a card that I got signed last year at a Wingnuts game. Yhency started off the season with the Grand Prairie AirHogs and I was able to get this card signed at the 'Nuts home opener.

Yhency pitched in the Majors for parts of six seasons with the Dodgers and Diamondbacks. He saw most of his playing time during the first two seasons with the Dodgers. He got into 31 games as a rookie in 2004 and posted a 6-2 record with a 2.48 ERA. The next season, he pitched in 74 games and went 4-10 with 21 saves and a 5.33 ERA. Though he pitched in the big leagues for parts of four more seasons, he never appeared in more than six games in a season after the 2005 campaign.

It would be cool to get this card signed by Steve Schmoll, too. However, I really do not see that happening as Steve has not pitched professionally since 2008.
at 5:40 PM